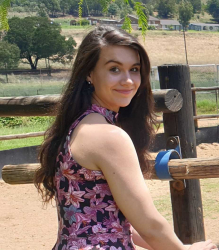 Christine Kent
Christine is obsessed with SpongeBob and has been since she was eight years old. As a child, her room was decorated with all things SpongeBob. One could say she knows a lot about not just the characters but also the deeper meanings and lessons one can find in episodes of SpongeBob, and she loves passing on that knowledge!

As a kid, I loved SpongeBob. I was glued to that TV, and nothing and I mean NOTHING, could get me to stop watching it. I would wish the school day was over just so that I could watch SpongeBob and his friends.

As I got older and approached my tween years, I became lonely and depressed because I had no friends. But SpongeBob and his happy-go-lucky personality never failed to put a smile on my face.

It was the mid-2000’s and this is when the Emo style was very popular. The style described how I felt inside, and I thought the all-black look was awesome. Being dressed in all-black clothes with my dark brunette hair covering my eyes made me happy.

It did not make my parents very happy, but they thought that it was a phase that would blow over quickly. Oh, boy, were they wrong! Once an emo, always an emo!

I never thought that my love for SpongeBob and being emo could even be in the same category until I found Emo SpongeBob.

Are you obsessed with SpongeBob and know everything about him and his friends? Well, did you know SpongeBob was emo once? Or let me rather say there was a popular emo meme made about him.

If I prickled your interest, read on to learn more about Emo SpongeBob and how the meme became a thing. Trust me, this meme will become one of your most used memes. So let’s get started!

The Start of the Emo SpongeBob Meme

The Emo SpongeBob meme was first a sketch on a page in a book called I Ripped My Pants! It was drawn by DeviantArt artist u/kez-the-emo-lord in 2007.

But it wasn’t until the years 2008 and 2009 that the sketch of SpongeBob became popular, and YouTube edits were made from it. It is believed that the edits were made by the emo community. Then, it became a meme and spread like wildfire among friends.

The Appearance of Emo SpongeBob

So the Emo SpongeBob meme is an edited version of the sketch drawn by DeviantArt artist u/kez-the-emo-lord in the book “I ripped my pants.” In this book, SpongeBob keeps ripping his pants, making people laugh. But after a while, they don’t find him funny anymore, and this is where I believe SpongeBob becomes sad.

The edited version is a close-up of the sketch, and SpongeBob has black hair that is in an emo style. He is dressed in all black with black and white sneakers and a white skull belt.

The Emo SpongeBob Meme in an Episode

The Deeper Meaning Behind The Emo SpongeBob Meme

The deeper meaning is that it is okay to be not okay sometimes. If SpongeBob, who is always happy and lucky, enthusiastic and positive most of the time, can be emo, then you can be too. Life is all about ups and downs. You should know that you can always ask for help if things get too bad. You don’t have to face tough times alone.

My Opinion on the Emo SpongeBob Meme

I love it! It is cute and funny but can also be seen as a reminder that even the happiest people are not always happy. This meme really helped me when I was going through my rebellious and tough tween and teen years. It made me positively look at life again. And realize that other people are going through the same situation as me.

SpongeBob was there in the good and bad times. And now my friends and I send each other SpongeBob memes to describe how we feel every day. When we wake up to an Emo SpongeBob meme, we know the other person is having an off day. You don’t always have to use words to describe your feelings; a meme can do it for you. 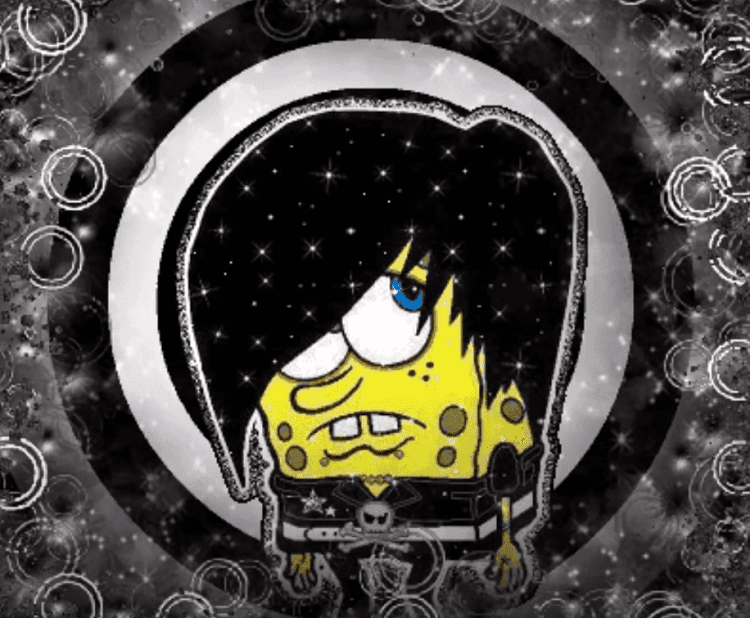 So if you like the Emo SpongeBob meme, here are other memes you can enjoy and share with your friends and family.

In this meme, we see a photo of SpongeBob’s Emo phase in a frame against the wall and SpongeBob crying about it. I feel like I can relate to this meme so much! I will think that my outfit or hairstyle is the cutest ever and then take a photo of it.

Months or years later, when I look at the photo again, I always have the same reaction “Like, what the hell were you thinking, Christine?”

This meme means that you get a little worried when you see your girlfriend talking to someone else. But when you see they only have 7 scars on their wrist, you relax because you know you have more and there is no competition. It is dark humor. Emo SpongeBob is not Cutting it at the Krusty Krab 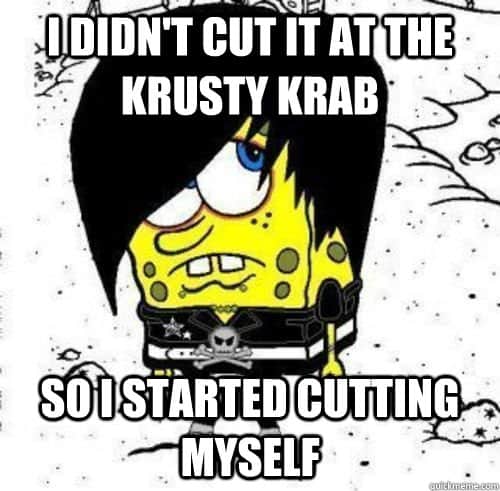 This TikTok video is on Emo SpongeBob singing “Monster How should I feel (Monster).” I love this song and that there is an Emo SpongeBob version of it. I think this video is so funny and cute.

Answer: Oh yes, he definitely is! The Emo SpongeBob came to life in 2007 through the DeviantArt artist u/kez-the-emo-lord in the book “I ripped my pants.” But it was only in 2008 and 2009 that it became the popular Emo SpongeBob meme through YouTube edits that were made of it.

Question: Are they Still Making SpongeBob in 2022?

Answer: It is an exciting yes! The thirteenth season started in October 2020. The season was renewed in March 2022. Yay, season 14 is coming!

Question: In what Year did the Emo SpongeBob meme become Popular?

Answer: Emo SpongeBob became popular between 2008 and 2009 because of YouTube edits of the sketch in the book “I ripped my pants.”
After 13 years, it became popular again in 2021 when the Emo SpongeBob meme was featured in the spin-off series “Kamp Koral: SpongeBob’s Under Years” in the episode “What about Meep?”.

That is a wrap, guys! I hope you enjoyed this Emo SpongeBob guide. And that you learned something new about the meme and where it came from. The Emo SpongeBob meme means a lot to me and holds a special place in my heart. It made me strong and got me through the bad times.

And now, after the meme became popular again last year(2021), it has become a special meme in our friend group. We use it to let the others in the friend group know when we are having a bad day. Sometimes a picture says more than words can, and this is that picture for us.

Remember that you are allowed to have feelings, and it is okay to not be okay. If you want to be emo, be emo! Don’t let anyone tell you how you should live your life.

Do you like the Emo SpongeBob meme? Have you and your friends used the meme to tell each other how you feel? Or to have a laugh? Let me know in the comments below.